From the blog of Lori Bush, At-Large member of Cary Town Council.

Cary, NC – As an elected official, it probably makes sense that I am passionate about democracy and public service.  (Otherwise, I probably wouldn’t have run for office, right?)

Perhaps my early engagement learning about our government at Girl’s State is what sparked my pubic service interest.  But it’s watching the process of  government and seeing how few people vote, that fuels me today.  As folks who know me well can tell you, I been an “active” participant in the electoral process –  reminding my family, neighbors, friends and constituents about the importance of voting.

There is phenomena in this country where folks just don’t seem to vote.  In the 2008 Presidential election about 63% of eligible voters cast their ballots – but in local elections, that number is closer to 15%.  Yes, 15%.

This has always surprised me.  Why would you NOT vote?

I’ve heard lots of reasons for not voting from folks. “I’m too busy or, I work and can’t get there, I don’t know who’s running, My vote won’t matter…   But none of these really ring true to me.

Voting in this country is a right, privilege and responsibility.

Throughout history, so many of our servicemen and women have given their all to protect our nation, or as Abraham Lincoln said, “their last full measure of devotion.” Voting is a right that people across the world continue to fight for and that many have not yet achieved.

Voting is also a responsibility – and an opportunity. It’s your chance to choose who represents you in making the decisions that guide our society.  Many elections also have social consequences, as well.  Without your vote, your voice is not heard.

By now you maybe thinking “C’mon, does my vote really count?”  I’m here to tell you, it does.  We’ve seen elections recently that were decided by just a few votes.  That alone should tell you that each and every vote matters.

But, your vote does more than elect candidates.  It holds us, your local and national leaders responsible and accountable for the decisions we make. Your vote also sends a message about the issues that you believe are important, and have you weigh in on the topics of the day, personally providing your say about your community.

So, you’ve seen the signs all around town by now.  With the primary election on May 8th, the candidates are doing what they need to do to get your attention. For some folks that aren’t from North Carolina, there are some new definitions that have to be learned about voting here.

One of the great advances in the voting process has been no-excuse absentee, also called “early voting”. Early voting is the ability to allow a qualified voter to cast his or her ballot prior to the official election day.  No excuse or justification is required.  You just show up!

In Wake County early voting is in full swing, and you can vote this week at a location near you from 11am – 7pm, Monday thru Friday.  In Cary, you can vote at the Herb Young Community Center, or check out the Wake County Early Voting page for more information. If you live in Chatham County, check out the Chatham County  Election page for more information.

Let’s face it, with early voting and their extended hours, there is really no excuse NOT to vote.

This wouldn’t be a blog without my editorial perfunctory comments.  So here goes. 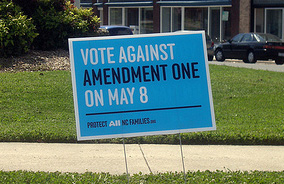 I will be voting AGAINST AMENDMENT ONE.

Plain and simple: it’s bad public policy, it harms North Carolinian families and children, and it writes discrimination into our State Constitution.  Furthermore, it reduces our state’s ability to successfully compete for jobs in these tough economic times while harming our business climate and having the potential to have far-reaching unintended consequences for so many.

But for me, it’s more personal. As the grandchild of a Holocaust Survivor, I know too well the impact of discrimination.  What Amendment One aims to do is to make some of our friends, family members and co-workers feel “less than” the rest of the population.  To limit their ability to care for their loved ones and to deny them or their children health insurance, whether in a gay or straight domestic partnerships, is ludicrous.

This is discrimination, plain and simple; and our state, our people, and our constitution deserves better than this.

Amendment One photo by kittenry.

Wednesday: Taste of the Triangle
Scroll to top