From the blog of Town Council member Don Frantz. Photo by Bob Gutowski.

When I joined the council in 2007 I was well aware that I was in for an education. I knew I would learn more than I ever wanted to know about land use planning and zoning, property development and environmental issues – but never did I expect to become an expert in chickens and bees. (note: I am not really an expert, I just play one on TV)

I already addressed chickens in a previous post so let’s talk bees.

Currently the town does not regulate beekeeping. Town staff, In response to a few citizen’s concerns, attempted to craft an ordinance that addressed those concerns while continuing to allow residents the opportunity to keep bees. The problem however is that as proposed, the ordinance would only allow for beekeeping on lots larger than 30,000 sq. ft. (2/3 acre). Take a guess how many lots in Cary are 30,000 sq. ft. or larger?

The proposed ordinance would essentially eliminate beekeeping in town limits.

So who cares right? I mean, who needs bees anyways?

Honey bees play a critical role in agriculture – the most important being pollination of plants. Over 1/3 of all the food we consume relies on honey bees for pollination. No bees = no food. Think also of the economic impacts. What would happen to the price of food if you removed 1/3 of it from grocery store shelves? Numerous studies indicate a global decline in honey bee populations.

Most of the complaints the town has received about folks keeping bees has to do with the fear of being stung and folks who are allergic to bee stings – a legitimate concern. However, the overwhelming majority of “bee stings” are not caused by honey bees, but instead yellow jackets, wasps and other stinging insects. Honey bees are very docile and only attack to defend themselves or their hive…or if you happen to step on one. Yellow jackets on the other hand are very aggressive and can easily be confused for a bee. See here for a visual comparison.

But not being one to believe everything I read, I went and visited a friend’s honey bee colony first hand. 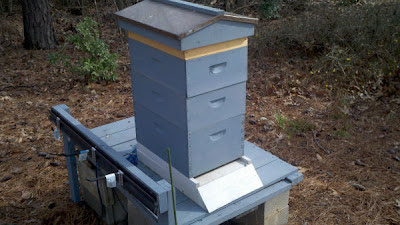 Here is the hive. It is estimated that there are upwards of 50,000 bees inside. 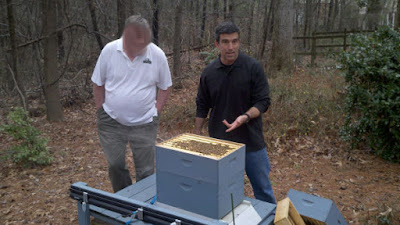 Here we are inspecting the hive (bee owner’s face intentionally blurred). The gentleman on the right is Mr. Will Hicks, Apiary Inspector from the North Carolina Department of Agriculture and Consumer Services. Notice they are not wearing any bee protection suits. They did ask me if I wanted to wear one, but since they weren’t, I wasn’t going to be the wuss of the group. Mr. Hicks was very informative and answered a number of questions I had. 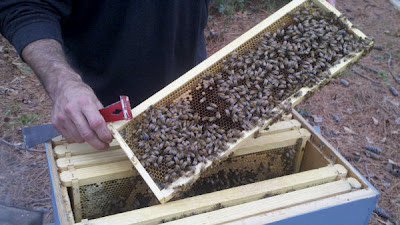 Here we are looking for any indication of disease or mites. No real issues were discovered and the colony appeared very healthy. The honey tasted pretty darn good too!

Even after “breaking into their house”, none of us were ever stung, nor did the bees show any sign of aggression.

Bottom line: I don’t believe the keeping of honey bees to be an issue that we need to regulate. While I am sympathetic to concerns, I prefer to base my decisions on fact instead of fear.

At our council meeting we rejected the proposed beekeeping regulations and instead directed staff to work with folks from the bee community in the hopes that we can come up with a set of rules/guidelines that everyone can live with.

I would have prefered to have done nothing (not create any ordinance). But we’ll see what comes back to council in a month or so after town staff and beekeeping professionals put their heads together.

Things could be worse. Cary, like many cities and states across America, could be facing multi-million dollar budget deficits, rampant unemployment, increased crime and corruption and a host of other serious problems.

I’ll take chickens and bees over that any day.